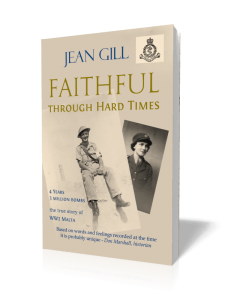 Malta. Christmas 1942 diary entry: ‘Never in my life have I been so lonely.’

I’m delighted to release the next of my video trailers, this time for Faithful Through Hard Times.

If you want to know more:

This is not a WW2 memoir. It is a riveting reconstruction from an eye-witness account written at the time in a secret diary, a diary too dangerous to show anyone and too precious to destroy.

The true story of four years, 3 million bombs, one small island out-facing the might of the German and Italian airforces – and one young Scotsman who didn’t want to be there.

Young men died in wars and old men lied about what they’d done in them; George had no intention of doing either.

Private George Taylor arrived on Malta in 1940 thinking that shiny buttons would earn him fast promotion; he left four years later, a cynical srgeant and a Master Mason who never said, ‘I was there’ without a bitter smile.

Despite the times he said, ‘It’s me for the next boat’, despite his fears that Nettie had forgotten him, George kept the motto of the Royal Army Medical Corps ‘In arduis fidelis’, ‘faithful through hard times’ – in public – and only told his diary the inside story of four long years.

Sixty years later, the truth has to be told.

By submitting a comment you grant Jean Gill a perpetual license to reproduce your words and name/web site in attribution. Inappropriate and irrelevant comments will be removed at an admin’s discretion. Your email is used for verification purposes only, it will never be shared.