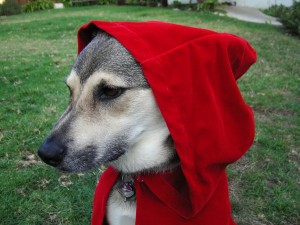 Wolfie, the star of your Photoshop homage is a rescue. The shelter claimed she’s a German Shepherd mix, but I’ve always felt she’s inclined toward Husky. She has the agility of a cat, walking across the top of fences and gates in a way no dog is supposed to. She is fiercely loyal to myself and my two sons, but remarkably egalitarian about it; literally pacing off the distances between the three of us about the house, and then resting with a sigh at the center point, equally equidistant to her loving boys. Though tough as suggested by her name “Wolfie”, she can genuinely be a feminine doll, as seen in this “Little Red Riding Hood” picture. The genesis of the picture is obviously based on her name, the big bad wolf and the red hooded lass from the fairy tale.

By submitting a comment you grant Jean Gill a perpetual license to reproduce your words and name/web site in attribution. Inappropriate and irrelevant comments will be removed at an admin’s discretion. Your email is used for verification purposes only, it will never be shared.